Use and development in 2018: From computer waste management and conversations on disabilities, to a digital hub in Kenya, a campaign on free speech and feminist curriculum and hackathon

Home / News / Use and development in 2018: From computer waste management and conversations on disabilities, to a digital hub in Kenya, a campaign on free speech and feminist curriculum and hackathon

Civil society actors, women’s rights and sexual rights advocates have the capacity to confidently use the internet and ICTs, and engage critically in their development. This is a compendium of the highlights from APC's Annual Report for 2018.

Disco-tech foregrounded disability and accessibility to the internet 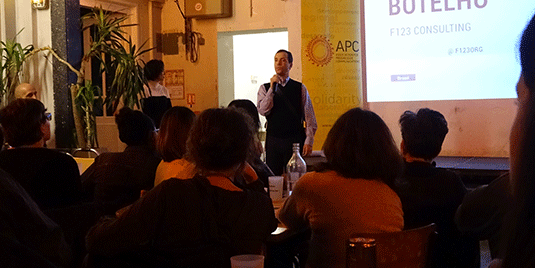 "Disability is not about the person, it’s about the interaction between the person and the environment," was an idea repeated by several participants at the 2018 Disco-tech event co-organised by APC and Hivos/Digital Defenders Partnership, which took place prior to the Internet Governance Forum in Paris.

The presentations at 2018’s Disco-tech were inspiring, showing a diversity of voices and a range of experiences, with 10 speakers from Brazil, Colombia, Germany, India, Kenya, Ireland, Sweden and the United States.

The speakers raised the need to include persons with disabilities in the decision making around closing the accessibility gap. While they acknowledged the availability of standards and means to make services accessible, they called for more will, policy enforcement, awareness and education skills to bring the technologies to those who need them. 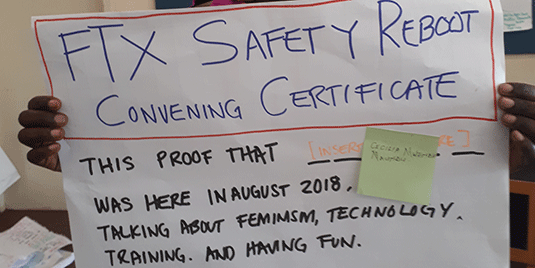 In August 2018, the town of Dhulikhel outside of Kathmandu, Nepal, was the scenario for the convening of 19 feminist digital security trainers and facilitators from a range of countries and contexts. Surrounded by the majestic mountains, the participants held a safe space to explore how to respond as trainers to the multitude of needs from organisations on the frontlines of queer organising, sexual and reproductive health, land and environmental rights and indigenous organising.

The FTX Convening enabled deep and intimate sharing of strategies, tactics, frustrations and remedies to build self-awareness and self-confidence for trainers and facilitators. It also provided a space to share experiences of using, adapting and localising the FTX: Safety Reboot training curriculum modules.

The work of feminist digital safety trainers is often not recognised in some human rights spaces, where a one-size-fits-all approach rules, so bringing a holistic and care approach is crucial. The digital “layer” can either add greater stress or, if approached through fun, creativity and care, can open up a space for activists to become curious and confident in taking digital, physical and emotional safety as critically interlinked to well-being.

As one of the participants expressed, “The facilitators did a great job in order to provide space for us to speak about the work we do in terms on safety and security, as well as discuss our personal challenges and success stories as well.”

Image: Participant at the FTX Convening holding a certificate, by Jennifer Radloff 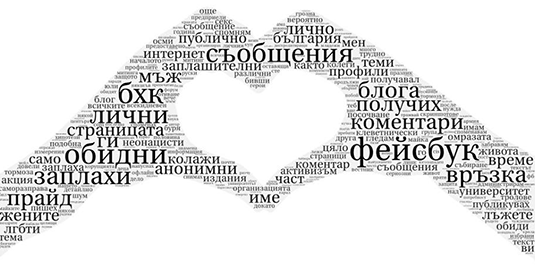 With support of APC, in September 2018, BlueLink launched the campaign "Free Speech vs Hate Speech: Online security for environmental, gender and human rights activists in Bulgaria". This campaign researched the forms, roots and consequences of online hate speech against civil society activists in the country and gave a start to effective counteractions that activists could use in their work.

A one-day workshop gathered social researchers, NGO representatives and activists to discuss definitions, forms and mechanisms of online hate speech, and to exchange practical experiences and expertise to identify action and policy responses to hate speech online. The event created a safe space for participants to share experiences and to help them realise that they are not alone, and that there are resources they could use to protect themselves from abuse.

Image: BlueLink. Most common words in the answers to the question “In what way have you been an object of online hate speech?”

A digital hub for the Malezi School in Kenya 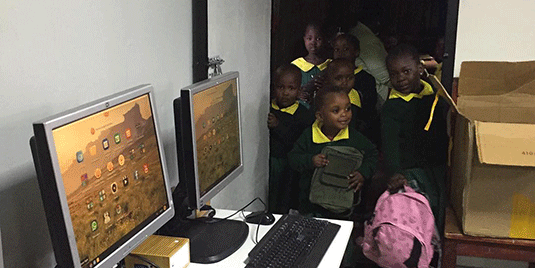 The Malezi Community Digital Hub is a programme led by the Computer Aid Kenya office with a view to establishing one of the only hubs in one of the most vulnerable communities in Kenya. Less than a handful of NGOs work in Kitui Ndogo slum due to its hazardous sanitation problems, security issues, and its relatively small size (compared with Kibera slum). It has been neglected by the local government administration, which does not have the resources or willpower to address the numerous, complex challenges that face the residents of this community.

Malezi School is a private institution with a population of 230 students from class 1 to class 8, paying a monthly fee of KES 350 (USD 3.5); 20% of the students are sponsored by the school paying no fees, including three kids with special needs. By developing the digital hub at the school ground, Computer Aid will enrol 25 teachers from five schools into ICDL training (ICDL is the world's leading computer skills certification), getting them certified in information technologies skills which will enable them to, in turn, train their students and be able to implement the digital curriculum in their courses. The digital hub will serve the teachers and students in Malezi school as well as another five neighbouring schools with an average student population between 80 to 150 students each. 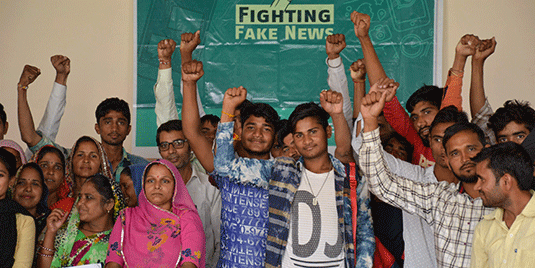 After years of on-ground experience in delivering functional digital literacy through hands-on training and workshops in rural and tribal communities, New Delhi-based Digital Empowerment Foundation (DEF) has now designed and developed START. As a digital and media information literacy (MIL) toolkit, START has been designed exclusively for first-generation technology users – who may or may not be traditionally literate and may only rely on oral communication – to promote digital inclusion and fight information poverty.

START is a 45-hour curriculum that covers 40-odd topics that take a student through a learning journey of understanding parts of a computer, learning to use essential applications, exploring the internet for contextual relevance, leveraging the power of social media, keeping oneself safe online, and becoming a conscious consumer and producer of information online. The pedagogy for START focuses on hands-on training and workshops in rural and tribal communities through activities and “gamification” of topics.

In 2018, DEF incorporated a module on Fighting Fake News in the START toolkit, which helps social media users, particularly WhatsApp users, in learning how to spot and verify misinformation on a daily basis. Under a partnership with WhatsApp, DEF was able to take this module to 35,000 individuals across 11 Indian states, targeting police officers, district administrations and college students at the city level and last-mile WhatsApp users at the village level. 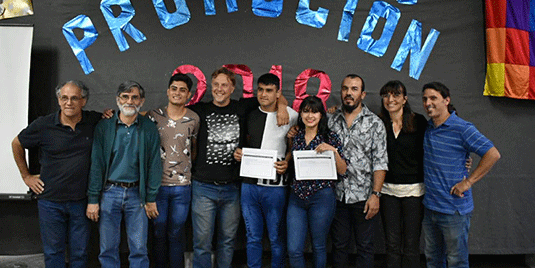 During 2018 Nodo TAU achieved great progress in the generation of knowledge and expertise on Waste Electrical and Electronic Equipment (WEEE). One of the concrete advances made was the creation of jobs managing computer waste for young people in vulnerable situations and living in marginalised neighbourhoods in the city of Rosario, Santa Fe, Argentina, and at the same time making a contribution to the improvement of the local environment.

Nodo TAU coordinated a training course on computer assembly and maintenance with young people, after which eight of them will work in the local waste management plant that will begin operation in 2019.

At the end of the year, the trainees visited two recycling plants in the cities of La Plata and Buenos Aires, where they were able to learn from similar operations and gain a better sense of the activities they will be carrying out in 2019. 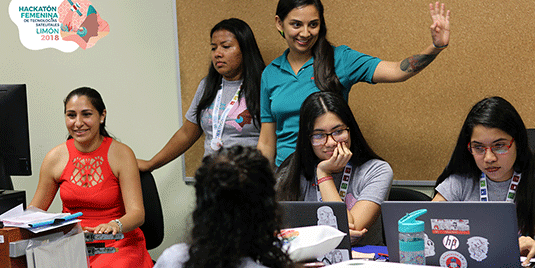 The Female Hackathon, a methodology developed by the TIC-as Programme of the Cooperativa Sulá Batsú in Costa Rica, is an approach that offers girls and young women the opportunity to create technology, combining technical, leadership and digital-based entrepreneurship skills. It is a process lasting one month, where participants are trained and accompanied, after which they spend two consecutive days developing a technological prototype that is later introduced in a public presentation.

The fifth edition of the Female Hackathon in 2018 addressed the theme "satellite technologies”, and gathered 70 girls and young women ranging in age from 16 to 30, who worked distributed in 15 teams to develop solutions aimed at fostering the local development of the city of Limón.

The Feminine Hackathon is an initiative that unites the efforts of many people, institutions and companies, to create a safe space in which girls and women can think, create and grow together with technology. The 2018 edition was organised by the TIC-as programme from Cooperativa Sulá Batsú and the Inter-American Development Bank, in partnership with other organisations, ministries and companies. 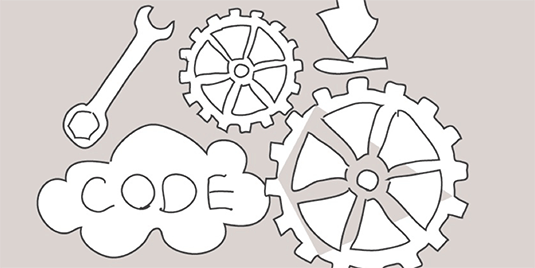 The adoption and use by APC members and staff of free and libre open source software (FLOSS) systems installed and promoted by APC increased in 2018 through extended use of Nextcloud online cloud service, OnlyOffice collaborative suite and other advanced FLOSS tools and features, the update of several FLOSS online systems used by APC (LimeSurvey, CiviCRM and others), as well as further development of several FLOSS systems built in-house by the APC team in support of APC’s internal communications processes.

The number of initiatives by members on FLOSS and other sustainable, collaborative and privacy-enabling technology has increased with six grants provided to members working on these initiatives.

Image: Extract from the visual representation of APC’s Theory of Change for the period 2016-2019.

Worked with others on building sustainable internet infrastructures 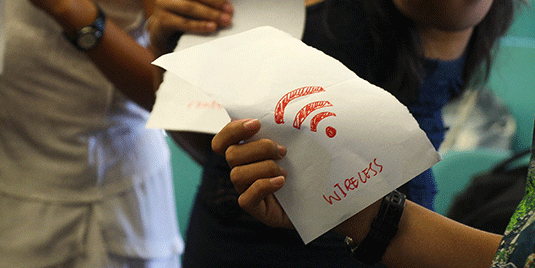 The InfraRed initiative comprises over 20 independent, feminist, cooperative, anti-fascist and alternative service providers from 19 different regions that have come together in solidarity to support one another in their shared work. 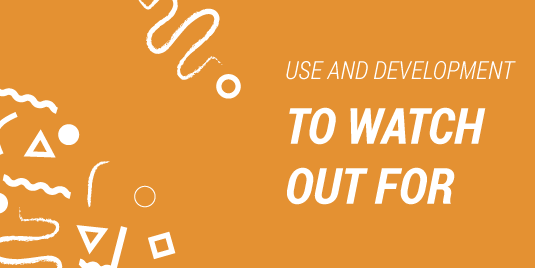 The FTX: Safety Reboot new modules will be launched, after having integrated substantial learnings gathered through using the modules at various events.

Look out for two Disco-techs in 2019! We will host one during RightsCon in Tunis and another one during the Internet Governance Forum in Germany.