APC's Annual Report for 2016 narrates organisational life matters and the year's work around our six strategic areas: access, rights, a feminist internet, governance, use and development and the APC community, told through 60 short stories, 25 of them contributed by our members. 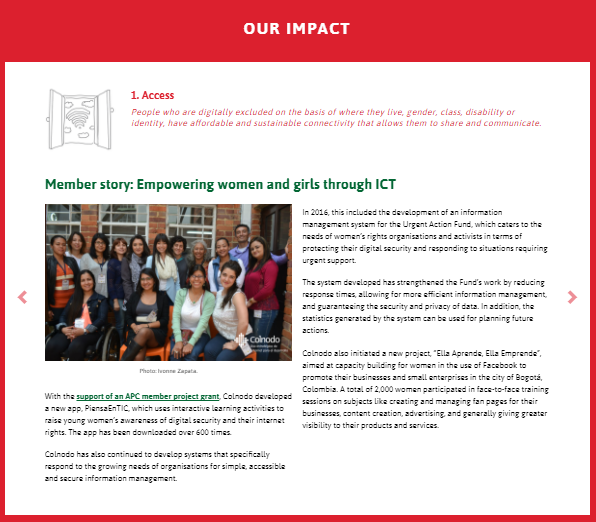 2016 was a year of several changes for APC. It is quite remarkable, this characteristic of change: it is slippery while it is being made, hard to acknowledge and understand while it is happening, but mind-bending when looking back. This is what our 2016 APC Annual Report condenses in a unique way.

In December 2016, Anriette Esterhuysen informed the APC Board of Directors that she would like to step down from the position of executive director after 16 and a half years in this role. "This is both an introduction to the 2016 APC Annual Report and an opportunity for me to say goodbye and express what an honour it has been to be APC’s executive director for the past 16 years,” Anriette expressed in her 2016 Annual Report introduction.

APC’s new executive director, Chat Garcia Ramilo, was warmly welcomed in her new role starting this year. “Enjoy the journey, the challenges and the rewards. Remember that you will never have to walk entirely alone… there is a network around you,” added Anriette. “There are many challenges lying ahead, but she can rely upon a highly committed team and a growing membership network, which I am sure will support her on our multiple work fronts,” concurred Julián Casasbuenas, chair of the APC Board of Directors.

Changes in the way we strategise for change

APC members approved a new strategy for the network during the period 2016 to 2019, with a clearly defined impact objective: “People affected by repression, discrimination, exclusion and inequality, in particular women, are able to access, use, shape and defend a free and open internet for their needs, priorities and for the realisation of human rights.”

To achieve this we will focus our efforts on six key result areas: access, rights, a feminist internet, internet governance, internet use and development, and the APC community. See the full APC Theory of Change here and read about the progress made during 2016 here.

Changes in APC's support to members

In 2016, APC initiated a new subgranting programme, with support from the Swedish International Development Cooperation Agency (Sida), aimed at enabling its member organisations to contribute to the implementation of APC’s strategic plan at the national level, as well as to strengthen ongoing work of APC members that is linked to APC’s strategic priorities.

In addition to these, in 2016 APC supported travel by 18 members with a total of USD 28,584 from the APC Member Exchange and Travel Fund (METF), which supports collaboration among members and participation in events.

With the funding provided by Sida, APC will be able to support member projects for the next three years. During the first year of the subgranting programme, our members have done incredible work. Some of these grant-supported initiatives are featured as member stories in the Annual Report.

Changes in the network: Growing stronger in numbers and regions

"Growth in the number of APC’s organisational members suggests that social change and development organisations recognise the need for being connected to others in ways that are formal, based on commiment and trust, with joint decision making and collaborative implementation," commented Anriette in her introduction 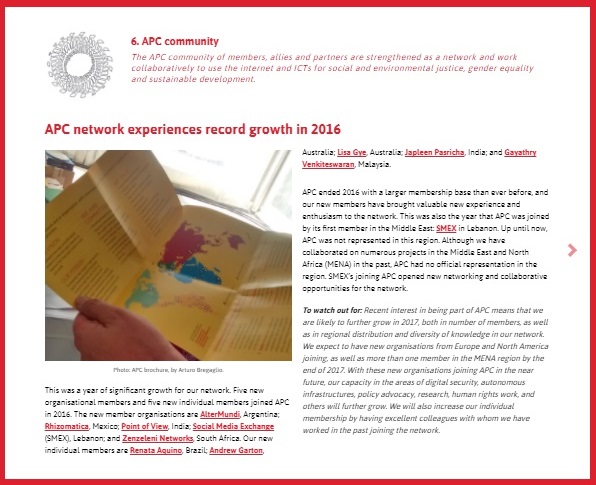 "Growth in the number of APC’s organisational members suggests that social change and development organisations recognise the need for being connected to others in ways that are formal, based on commiment and trust, with joint decision making and collaborative implementation," commented Anriette in her introduction2016 was also the year that APC was joined by its first member in the Middle East, a region in which APC was not previously represented: SMEX in Lebanon. SMEX’s joining APC opened new networking and collaborative opportunities for the network.

APC opened up membership to individual members in 2012, and was joined by seven that first year. By December 2016, there were 27 individual members in the APC network, from 24 countries on six continents. Another change has to do with individual members having their own section in the Annual Report, since we wanted to learn more about and from them. We asked our individual members two questions: "What was your main ´discovery´ in the field of internet for development, human rights and social justice in 2016?" and "What was the best technology-related book, article, or report you read in 2016?"

Changes in how we tell our story: Why are we going digital?

From this year on, APC Annual Reports will only be available in a digital and navigable version. Numerous organisations have started producing their annual reports in digital format, leaving behind the print copies.

There are several reasons that encouraged us to take this step forward, such as a lower production cost, expanded outreach, and last, but not least, a more environmentally friendly option.

We would like to thank all the people and organisations that made this publication possible, and above all, all those who worked with us to craft such exciting stories to tell for 2016. We hope you enjoy our Annual Report, and that it aptly reflects and does justice to the outstanding work APC and its members did in 2016!