Interview with Carlos Afonso: "I keep saying we need to advocate for a public plan seeking universal connectivity and the means of access for everyone"

Home / APC Talk / Interview with Carlos Afonso: "I keep saying we need to advocate for a public plan seeking universal connectivity and the means of access for everyone"

Celebrating its 10th anniversary, the Internet Hall of Fame recently inducted 21 individuals from 11 countries "who fundamentally changed the world through their work building and developing the global Internet". Among them was Carlos Afonso, one of the original founders of APC over 30 years ago. Afonso has continued to play an active role in the APC network, and he is now the executive director of APC member organisation Instituto Nupef, and also a member of the Multistakeholder Advisory Group of the UN Internet Governance Forum. 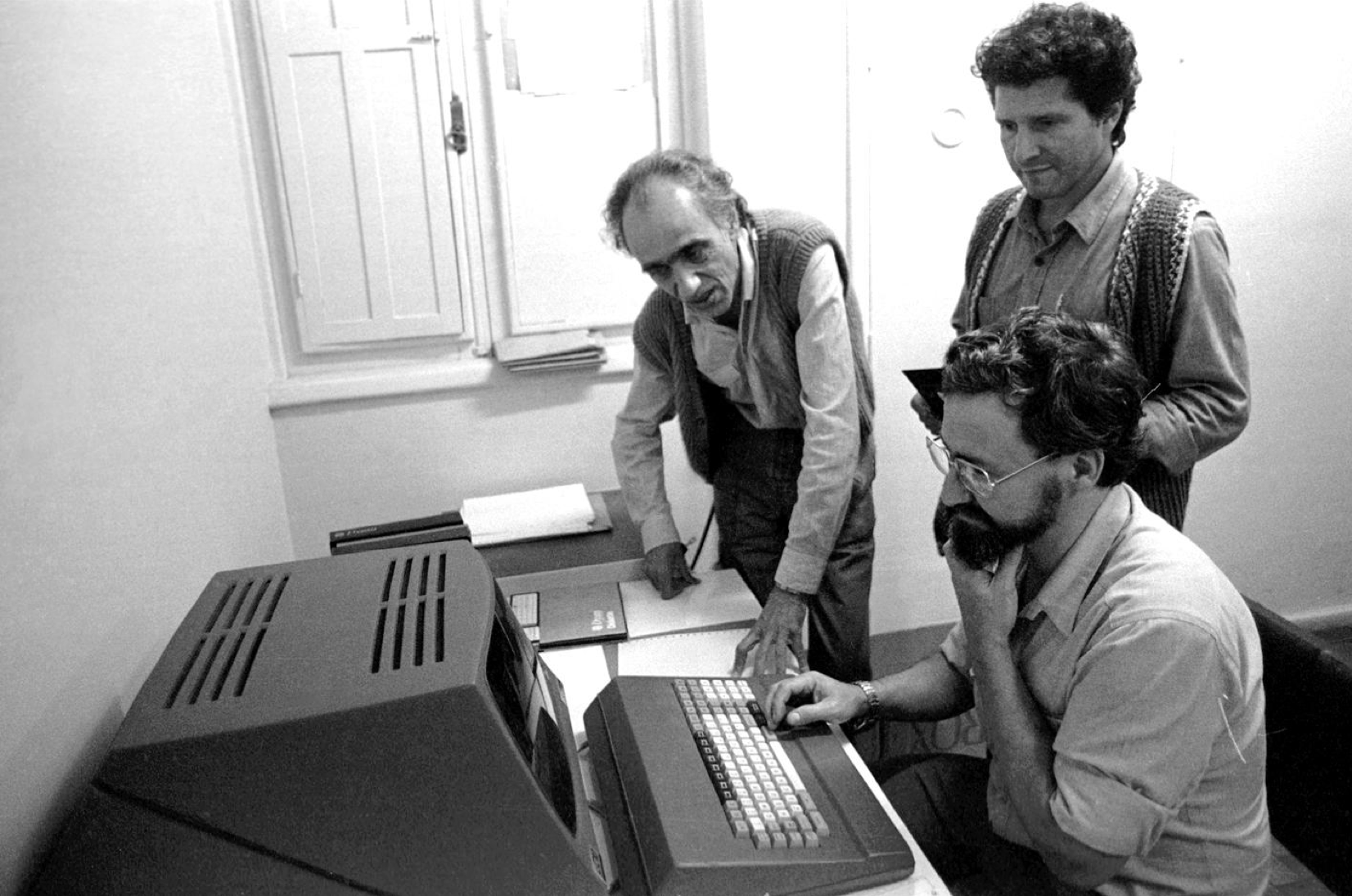 Afonso has advanced internet development and democratised access in Brazil and other Latin American countries by co-founding and co-leading several key organisations, including the Brazilian Institute of Social and Economic Analyses (Ibase) and APC. In 1989, with Afonso in charge, Ibase launched Alternex, a free service for civil society organisations and individuals in Brazil for the exchange of information by email and electronic conferences. Alternex was an example of a startup incubator for the internet in Brazil, notes ISOC, as it functioned as an internet gateway for hundreds of bulletin board systems, many of which became some of the largest internet service providers in the country. Among his many other accomplishments, Afonso also influenced the growth of the Brazilian internet and made an impact on global internet governance as a founding board member of the Brazilian Internet Steering Committee. You can read more about him and his career here and here. 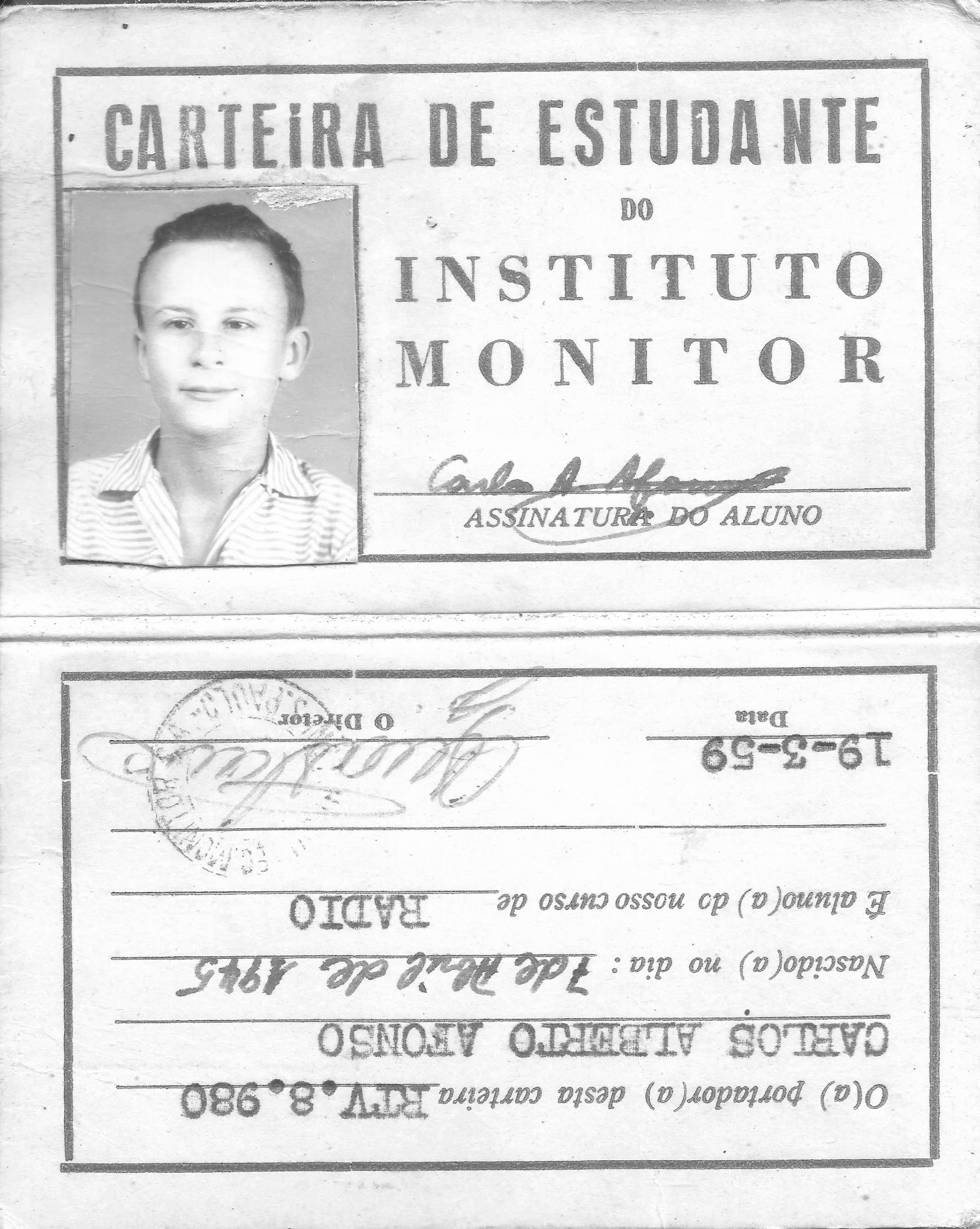 We interviewed Afonso about his being inducted into the hall of fame, his hopes for the internet in Brazil and beyond, radical interventions needed in the word of ICTs, and more.

The official citation for your induction into the Internet Hall of Fame summarises your illustrious career across the decades. Which achievement are you most proud of?

I see it as a historical totality and it's not simple to pinpoint a moment, but I think the decisions to bring a home computer to Brazil with us when my family returned to Brazil from exile in 1980, with the idea of using it to process data for social movements, together with the creation of IBASE with the focus of democratising information to democratise society (Brazil was still under a military dictatorship), were crucial.

You co-founded the Brazilian Institute of Social and Economic Analyses (IBASE) in 1981 and the Association for Progressive Communications (APC) in 1990. How do you see their role today in comparison to your initial vision for them?

IBASE left its pioneering activity of developing network communications and concentrated on producing, processing and disseminating information, as well as supporting social movements with formation/empowerment activities. APC grew much beyond our dreams of that time, and advanced its original idea of building engaged networks to a much higher level, being recognised by all relevant international fora on the quality and relevance of its activities. I think they continue to do the right thing in an effective way, so let them keep up their good work.

As the executive director of APC-member Nupef, what do you hope to see in Brazil with regards to the internet and other fundamental rights?

Brazil is a well-known interesting historical case of success regarding important aspects of the development of the internet, both in technical terms and in relation to many aspects of internet governance. Through IBASE, other NGOs and academia, we got involved in these processes from their inception. Some crucial milestones have been: 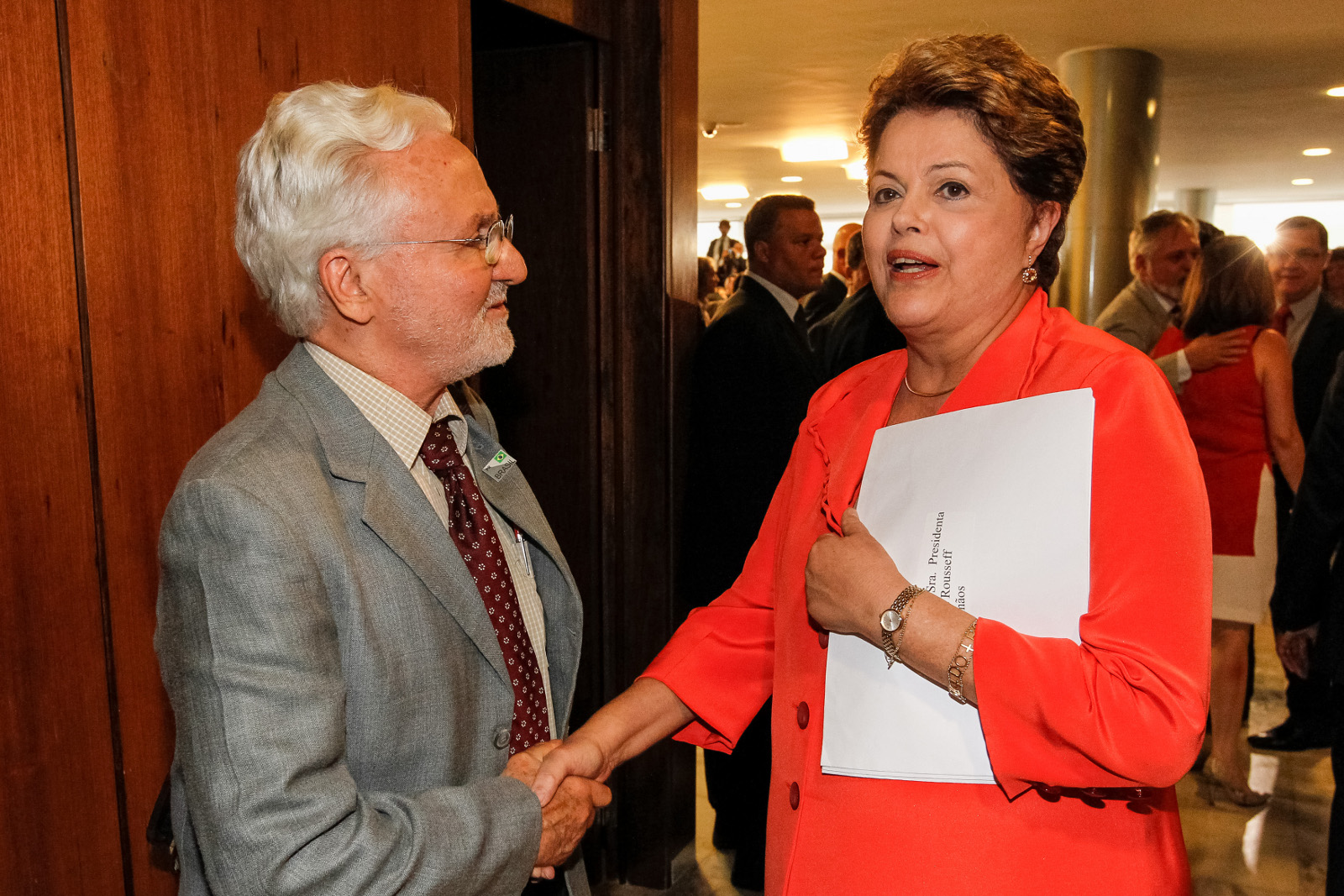 Carlos Afonso with Brazilian economist and president Dilma Rousseff in 2013

The milestones, however, do not mean that the internet is available with the necessary quality, permanence and affordability for all families in the country – far from it, although we have had significant advances mostly in the larger cities. However, in nearly all metropolitan areas there is inequality of access, even in the richer cities. In the interior this inequality (or outright non-existence) of access requires a major public policy of universalisation of access.

This means providing quality affordable access to all schools, all health centres, all local governments, and all households, wherever they are. To achieve this is a major strategic goal for the nation that will empower families and enhance their rights, particularly their right to participate, to get involved in the day-to-day life of the country in an evolving situation in which, more and more, not being well connected means not being a citizen with full rights.

You were involved with APC when it helped set up the first email link with Cuba during the US blockade in the early 1990s. Is there a radical intervention that you think is needed today in the world of ICTs and social justice?

I keep saying that we need to strongly advocate for a meaningful public strategic plan which seeks universal connectivity and guarantees the means of access (not only well-connected terminal devices, but also proper formation to confront the challenges of the digital world) to everyone. In the meantime we should continue to support the deployment of community networks, knowing that this is not a permanent solution, but a temporary useful patch to enable communities to gain access until full connectivity reaches them.

What do you wish other people knew about the development of the internet?

We need to explain in learning processes certain important details of the network, like its layered structure, the different agents who run each layer, the risks involved in participating (or even just visiting) internet-based services, the huge difference between a particular service (say, a social networking platform) and the internet as a whole, and so on. People need to be aware of the changing regulations and laws, and we are currently in a maze of national and international regulations which confuses even a well-informed lawmaker. 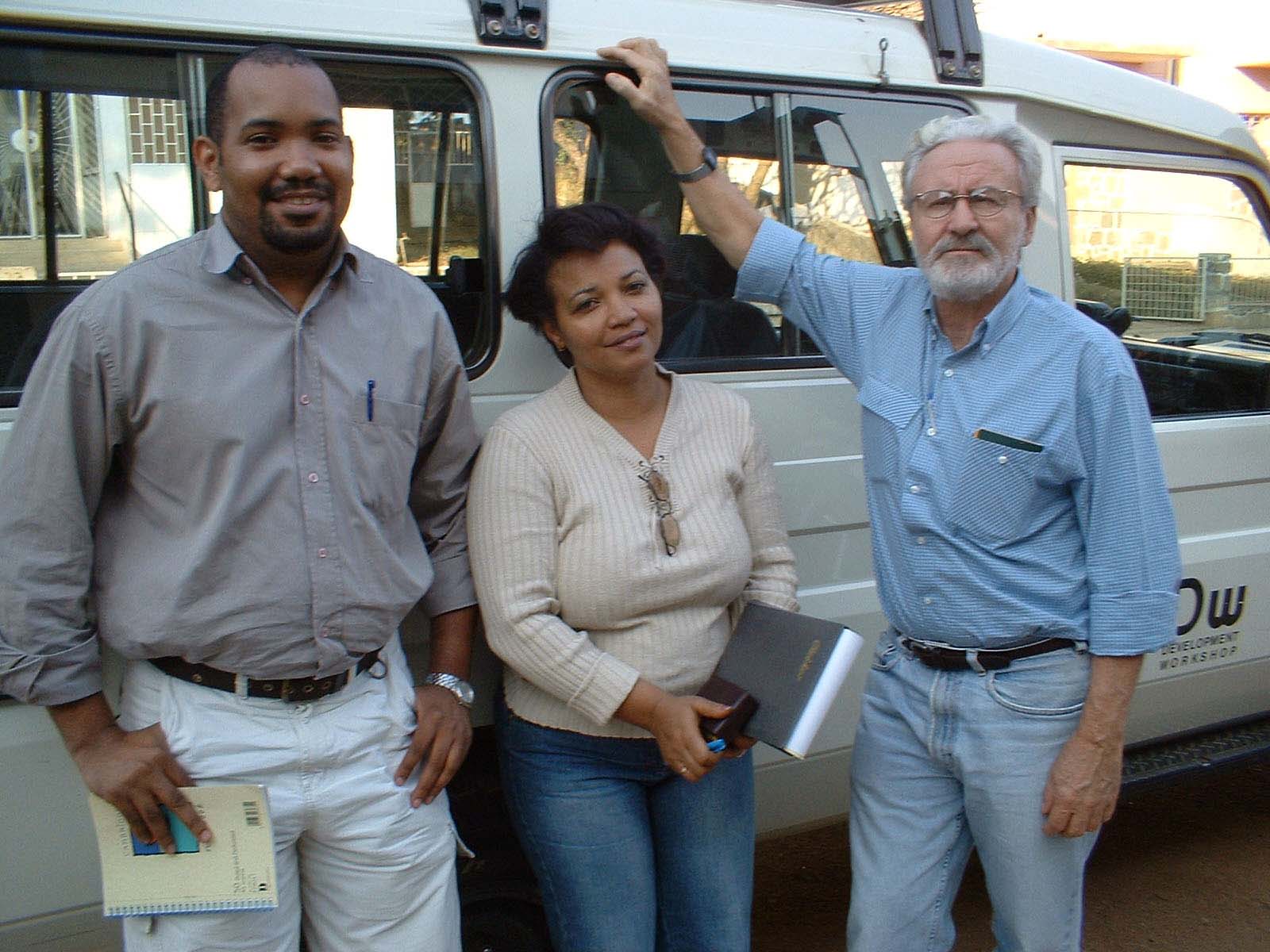 The internet is a relatively young technology. What is the biggest thing you hope it will become or do in the next decade?

The ideal scenario (bordering on the utopian) is an internet which is so well established in every home and office that people will take it for granted, like they do with electricity or the water supply (in areas in which these services are widely present). We are far away from it at this point, and inequalities will not go away for a long time to come.

Given your lifelong work on helping to develop the internet, what advice would you give to APC’s staff and members?

It would be too daring of me to give lessons to the APC team and members, considering the set of experiences and the diversity of activities that this community has accumulated. If I had to mention something, perhaps it would be both to always reinforce the notion that each one of us is part of an international, successful association of civil society organisations, individuals and social movements, and that this association needs to be always in touch with its members on its development and incidence process. Not a simple thing to do effectively, especially given the current scale of the association.

What might someone be surprised to know about you?

I love cats, I have a difficult relationship with dogs, I like all kinds of vegetables and fruits, I love to drive, and... I very much like hamburgers and beer, although it has probably been more than two years since I grabbed one – damn pandemic! :)